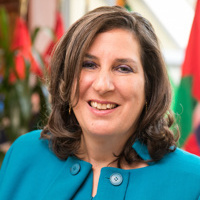 Dr. Brenda Shaffer is a Research faculty member of the Energy Academic Group at the Naval Postgraduate School. Shaffer focuses on global energy trends and policies, politics and energy in the South Caucasus and greater Caspian and Black Sea regions, Iranian natural gas exports, ethnic politics in Iran, and Eastern Mediterranean energy. She also is a Senior Advisor for Energy at the Foundation for Defense of Democracies (FDD) think tank and a Senior Fellow at the Atlantic Council’s Global Energy Center in Washington, D.C.

Shaffer frequently provides research and expert counsel to international institutions, governments, energy companies, financial institutions and regional security organizations. She has served as an advisor to Israel’s Prime Minister’s Office and Ministry of Energy on policy related to the major natural gas discoveries in Israel. Shaffer has advised several companies involved in Caspian energy production and export. She has given testimony to several committees of the U.S. Congress, including the Senate Foreign Relations Committee and the European Parliament. She frequently appears on Bloomberg TV and in major news outlets worldwide to provide insight on developments in the global oil market.

You recently moderated the Energy Security in Turmoil panel at the Antalya Diplomacy Forum in Turkey, which discussed how governments can promote in tandem security and growth of energy markets. Can you provide us with a snapshot of how the severe volatility of global energy markets is a threat to U.S. national security and global security at large? And what can the U.S. do to mitigate these threats?

Energy affects almost every aspect of modern life, including economic prosperity, national security, public health, the environment, and climate. Energy is the most widely traded good, so energy prices have a huge impact on economic trends. Energy is also the biggest input into the costs of manufacturing, which often determine economic competitiveness. Successful energy security is essential for producing good outcomes in most public spheres.

Energy security is an integral element of national security. First of all, most of the U.S. military’s fuel supplies run on civilian supply lines and infrastructure. Thus, unreliable supplies of fuel and electricity affect the military. High energy prices can trigger global recession, which will weaken the industrial output of the United States and its allies and thus their ability to support their militaries. The current high energy prices have created a fertilizer shortage, which will likely lead to high food prices in the summer and global food shortages, which may affect millions and cause instability in many places in the globe.

In recent years, many have argued that U.S. energy policy should sacrifice one major goal to pursue another, promoting either the environment and climate or national security and the economy. Instead, we need to identify policies that can promote all these goals in tandem.

Europe’s energy crisis has been unfolding for some time, but Russia’s invasion of Ukraine and the unprecedented number of sanctions has made consumers all over the world acutely aware of how energy insecurity affects every major sphere of public life. For the military in particular, energy is a fundamental enabler of capability. In your opinion, how will the Russia-Ukraine conflict influence energy security, global markets, and defense now and in the coming years?

Since the Soviet breakup, there have been three previous Ukraine-centered crises that should have been a wake-up call about the need to engage seriously in energy security policies. Over the last decade, Europe undertook some positive steps, such as building infrastructure to bring gas from the Caspian Sea into Europe and contracting new gas volumes along this infrastructure. This pipeline system can transit additional gas volumes in the future and help Europe out of this current crisis. However, Europe did not do enough to ensure its energy security, and some of its policies have actually hurt Europe’s energy security. For instance, the EU fought against long-term contracts for gas imports, seeking to encourage use of renewable energy. However, blocking the commission of additional gas supplies left Europe without adequate natural gas supplies, since most suppliers won’t produce gas unless they know there is a long-term market. In addition, many European states removed gas storage mandates, assuming that somehow market mechanisms would provide the backup gas. Europe over-relied on markets alone to deliver supplies. However, in energy security, like national security, the state still needs to be engaged.

Europe even had a small preview last winter to this current energy crisis. In the winter of 2020-2021, there were natural gas shortages that forced many power and heat producers to use fuel oil due to the lack of gas and the high prices. This crisis a year ago should have catalyzed Europe into action to address its energy security needs, but once the winter ended, so did the efforts to address the energy security challenges. Hopefully, this current crisis will spur long-term action to improve Europe’s energy security.

The United States also needs to re-integrate energy security into its national security policies. The administration’s Interim National Security Strategic Guidance document does not even mention energy security. It mentions energy 10 times, seven of which are in the phrase “clean energy,” which means low-carbon energy. That is important, too, but fossil fuels still account for 75 percent of U.S. energy consumption and 85 percent of global energy consumption. It is important to address the security of both supply and price of the fuels in use today and not just in the future.

Why does NPS’ Energy Academic Group’s work to support global security studies matter? What kind of impact does the research, solutions and international work of the NPS community have on energy security and energy politics?

NPS’s Energy Academic Group engages in important and very fulfilling work that contributes to the U.S. military’s operational energy needs and strengthens the resilience of U.S. energy infrastructure and that of allies and partners abroad.

What led you to the Naval Postgraduate School and what is the most rewarding part of your work here?

I feel very fortunate to work at the U.S. Naval Postgraduate School. A person is lucky when his or her work and passion and values overlap. The work we are engaged in has great meaning for me. There is a truly intellectual environment at the school. We can freely debate issues. The students are at a very high level and engage enthusiastically in their studies.

I am researching and writing a textbook with two colleagues on operational energy. It will be used in courses to train and educate on the topic. I also teach courses sponsored by the Energy Academic Group, aimed at strengthening energy security and critical energy infrastructure protection in allied and partner countries. I am also very involved in our engagements with NATO centers of excellence. It is great to engage with energy and defense professionals in many countries. Most of those we meet appreciate the American effort to improve the defense of their energy systems and their energy security.

We’d love to know more about your personal research. What is something you are currently working on, or have recently worked on, that you find particularly interesting or impactful?

I engage in research on energy security trends and policies, with special emphasis on the interplay between natural gas and foreign policy and European energy security. I am also interested in the politics of the Caspian Sea region, especially Azerbaijan, Iran, and Turkey. I have just completed a book manuscript on ethnic politics in Iran. In addition to working on the operational energy textbook, I have begun research and writing a book on U.S. energy policy. The book aims to identify how the United States can reach all energy related goals — national security, economic prosperity, environment and climate.