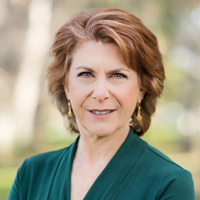 Anne Marie Baylouny is a professor of National Security Affairs, specializing in Middle East politics, grassroots organizing and the dynamics of crowds, and an associated scholar with the Abbasi Program in Islamic Studies, Stanford University. Baylouny received her Ph.D. in Political Science from the University of California, Berkeley. She is the author of When Blame Backfires: Syrian Refugees and Citizen Grievances in Jordan and Lebanon (Cornell University Press, 2020) and Privatizing Welfare in the Middle East: Kin Mutual Aid Associations in Jordan and Lebanon (Indiana University Press, 2010). She traveled and lived extensively in the Middle East, living in Syria, Lebanon and Jordan.

Baylouny’s recent work extends her emphasis on grassroots mobilizing into diverse types of mass mobilizing, including crowds and interactions with security forces. She continues to examine the dynamics of blame, scapegoating, and diverse grievances on mobilizing. Baylouny has been the recipient of numerous fellowships and awards — Fulbright, the Social Science Research Council, and the Mellon Foundation, among others. Before entering academia, she was a spokesperson on discrimination and human rights for a national Arab American organization. Baylouny speaks Arabic (classical and Levantine dialects), Italian, French and some Spanish.

What led you to NPS and what is the most rewarding part of your work here?

The students are the most rewarding part of working here and what drew me to NPS. Giving a guest lecture as part of my interview process clinched my desire to teach our student population. The questions they asked were sophisticated and pointed. And they have immensely important jobs. They need professors who know the area, who ran around the places they would be going. The students are still the reason I love working here.

Before entering academia, you were a spokesperson on discrimination and human rights for a national Arab American organization. How has that influenced your time as a Professor at NPS?

I began linking theory that we learn in graduate school with practical applications or policymaking during my time in Washington, D.C., a crucial element of our teaching here at NPS. I also realized that most Americans have little, if any, knowledge about Arabs, their history, or their lives. It was here that I saw how easily prejudice can arise from lack of contact, not necessarily from malice, a realization that has borne out in research. As one participant in a seminar at that time stated, “I have never even seen an Arab or a Jew. You could tell me anything about them and I would believe it.” This applies to immigrants, refugees, minorities, and different religious groups. Separation from different people will not create peace but will fuel stereotypes and prejudices that can be used to by political elites for adversarial purposes.

Your research has focused on Conflict Processes, Political Economy and Comparative Politics. What was the impetus behind your interest in these areas?

As an undergraduate, I traveled around Syria and the neighboring states, visiting relatives in Beirut and Aleppo. I was in Lebanon for a prolonged period during their civil war, crossing numerous militia territories on my own to travel to and from Damascus. That conflict spiraled out of control, beyond the desires of many – if not most – Lebanese. I discovered Americans knew nothing of what was going on and major battles were ignored by the news media.

Actions of individuals made sense given the context of what ordinary people suffered and decisions needed for survival. The circumstances, in other words, led to actions we would consider unhealthy. The refugee literature calls these negative coping mechanisms. Understanding the situations people live in is therefore paramount to predicting political outcomes.

My current work focuses on modeling crowd interactions with security forces [The Crowd Dynamics Modeling Group] using intermediate force capabilities, or less than lethal weapons [see https://jnlwp.defense.gov/]. We learned that both the social identities of participants and the specific tactics used toward them are the key factors in determining outcomes of violence or de-escalation. We are applying these to create an agent-based model that incorporates random probabilities in a crowd-security forces scenario. Our goal is to generate rules of engagement to de-escalate and avoid provoking or generating long-term backlash or animosity.

Our work has direct relevance to protests in the U.S. recently. We can analyze which tactics provoked on the one hand, and which social identities of protesters already believed violence to be an acceptable tactic prior to the protest. The goal is to be able to distinguish when higher orders of non-lethal weapons are needed and when they are more likely to provoke. We have examples of peaceful crowds that began to change when police in riot gear showed up, for example. That crowd returned to peacefully sitting down with Black Lives Matter signs when a prominent woman negotiated with the police causing the riot police to leave. She fended off an eager young male protester who met the riot police with equal violent intent. Our model can distinguish when the social identities embracing non-violence can dominate, in a situation that could escalate, versus situations when protesters arrive with the intent of violence. In many cases, those intentions can be determined prior to the protest through social media and public statements. During the Capitol siege, there were individuals who left instead of partaking in the actual siege and violence, and those who came prepared for violence.

Much of your work has focused on refugees, social welfare, and political action in the Middle East. What insights into the current events and refugee situation in Afghanistan (South Asia) can you share?

Refugees are one of the most maligned groups internationally. No one wants them. This has not changed through history. There is a common belief that Americans, for example, welcomed the Jews from Europe during and after WWII. They did not. The media, elites, public opinion all rejected Jews coming to the U.S., even children. Reading the news from that time sounds like reading about rejecting Syrian or Afghan refugees today. Writers talk about fear of cultural changes, terrorism and violence, different religions, and jobs being taken by newcomers. They reject the idea of accepting orphan children since, after all, they will grow up. This dynamic has little to do with Syrians, Afghans, or Jews. It has to do with prejudice and ideas of a particular American identity. Refugees can aid host countries economically and should be welcomed for humanitarian reasons. Many of our ancestors in the U.S. came here as refugees, although they were not called such at the time. Recognizing the history of the U.S. as a nation of religious dissidents, people brought here against their will, those fleeing famine, others running from political regimes, and still others seeking economic opportunity, could generate empathy toward current refugees.

How do you anticipate the past 20 years of conflict and U.S. presence in the Middle East and South Asia will impact the research and studies of National Security Affairs students at NPS?

The past 20 years has shown that grassroots movements are central to national outcomes and policy must contend with them. Popular mobilization was ignored for a long time in line with old crowd theories that relegated collective action to unorganized mobs. There were local movements that some scholars studied in almost all the Arab Uprising countries, including Syria, but these movements were generally viewed as pinpricks to stable authoritarian regimes. Knowing what type of movements these were, what groups were involved, what their interests were, we could have seen the Islamism that has overtaken the Syrian conflict far earlier.

Additionally, while uprisings in Eastern Europe among other places showed the viability of grassroots collective action, the Arab and Muslim worlds were still viewed as immutable culturally. This was a legacy of Orientalism, another old set of ideas that viewed Muslims and especially Arabs as unchanging and irrational. If these two outdated theories were true, social science insights would have no place. Recent decades effectively showed that neither concept is valid or helpful in understanding how individuals, groups, and countries act.

Social science is now applying and developing theories for these regions that incorporate change, the economic realities of daily life, and collective grassroots movements. Policymaking will follow, allowing us a more accurate view of actual and probable politics in these regions.