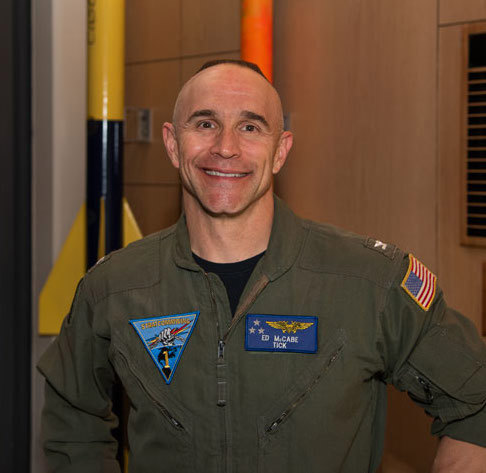 Capt. Edward "Tick" McCabe currently serves as the Air Warfare Chair at the Naval Postgraduate School, mentoring the cadre of aviator students on campus and serving as a liaison between the Naval Aviation community and the NPS community. McCabe came to the institution following recent assignments such as Commodore for Strategic Communications Wing ONE, Commander of Task Force 124, and three tours with the Ironmen of Fleet Air Reconnaissance Squadron THREE. He has also served as an aircraft launch and recovery officer, or “shooter,” on board the USS CARL VINSON, where he completed a deployment to the North Arabian Sea and participated in Operation Enduring Freedom.

McCabe's shore assignments include serving as the TACAMO Readiness and Requirements Officer and subject matter expert on Naval Aviation’s unmanned systems for Commander, Naval Air Forces staff, where he also served as the point of contact for all aviation awards. He was recognized as the 2007 Honorary Tailhooker of the Year for his extensive work with the Tailhook organization recognizing Naval Aviation’s best. He also worked for the Joint Chiefs of Staff as the Chief of the National Military Command Center, Raven Rock Mountain Complex.

McCabe commissioned through the Naval Reserve Officers Training Corps program in June 1992 after graduating from the University of California at Los Angeles with a Bachelor of Arts degree in Political Science. He earned his Masters of Science in Systems Technology, Joint Command, Control, Communications, Computers and Intelligence from the Naval Postgraduate School in 2000.

What led you to NPS, both as a student and now as the Air Warfare Chair? What was the most important thing you learned as a student? What has been most impactful during your time on staff?

I would like to say that an unquenchable thirst for knowledge led me to NPS, but the reality was not quite as professionally inspirational. It was for family, both my wife’s family and mine lived in California, and since we were the only young parents on either side of the family tree, our two sons were the only grandkids. I honed my critical-thinking skills and gained an appreciation for my fellow services and a thirst for knowledge that has stuck with me throughout my career. The people, no question, from my aviation students, to former shipmates, faculty, staff and Sailors... I have thoroughly enjoyed the opportunity to lead, learn and develop myself and others, and build some friendships that will last for years.

Airboss Miller’s vision for my position was to change the narrative with regards to resident graduate education and Naval aviation, and there appeared to be excellent momentum as the Air warfare chair position was established and we began to become actively engaged with the entirety of the Naval aviation organization. Unfortunately, this effort was challenged by two short-term factors: an inventory crisis and COVID. The inventory crisis exacerbated a decreasing aviation student population. This was partially mitigated by a brilliant plan to utilize initial training delays and backlogs to facilitate in-residence learning. Shoemaker scholars (named for a former Airboss) and IGEP (Immediate Graduate Education Program) enabled a small number (20-30) Ensigns to come to NPS and within 12-18 months graduate and begin flight school with minimal negative impact on their career timing. Career timing is the number one driver for Aviation's disconnect with technical graduate education. COVID's impact was felt across the board, but particularly for the Air Warfare Chair that was in its infancy. The prohibition on travel significantly impacted the relationship building that will be key if we are going to reverse this trend. The upcoming work with Naval Aviation Warfare Development Command and ongoing work with U.S. Pacific Fleet should work to turn the tide, but it will take some time to fix the inventory challenges within Aviation writ large. Time will tell. Regardless of the number of aviators that are fortunate enough to attend NPS, each of them will make an impact and have a positive influence moving forward.

One of your goals as Air Warfare Chair is to keep NPS students on track for leadership roles during their time at NPS. How has that been addressed during your time here?

Active mentorship and involvement are keys to this at every level of our organization, and this has been the most rewarding part of my time here at NPS. The aviators on campus range from Ensigns, fresh from the Academy or Naval ROTC, and eventually headed to flight school, all the way to command-selected O-5's who will begin their command training track as they depart. Each echelon requires different levels and amounts of leadership and mentorship, and individual needs definitely vary but they are and will continue to be leaders as they return to the fleet. Formal and informal counseling, social events and milestone awareness have been three focus areas for me during my time. The nature of shore duty leads to some relaxation and recharging of our strategic reserves, but we have to stay ready and prepare for that next role as well.

Why is an NPS education valuable to leaders in Naval aviation as they return to the fleet?

The critical-thinking skills developed and honed at NPS are priceless assets for our leaders as they return to the fleet. Command selectivity is extremely daunting and most will not be among the chosen few, but they will continue to serve in a variety of other roles and these skills will make every day and every decision that they make, more informed and given enough data, accurate.

While on staff at NPS, you’ve played a large role in STEM outreach, to include Discovery Day. What is the best part of participating in that kind of outreach? What makes NPS a unique and viable option for students interested in a STEM career field and/or those interested in joining the military?

First, Discovery Day is amazing. Seeing the excitement on all the kids' faces is something that everyone should witness. It is refreshing and energizing. Second, getting an up-close view of our selected NPS warrior-scholars who serve as ambassadors and truly come to represent so much of what is good about our men and women in uniform is awe-inspiring. Finally, the STEM facet and our faculty. Their ability to teach graduate-level science and tech on Thursday and then effortlessly explain complicated topics to middle schoolers, all while keeping everyone's rapt attention, consistently surprises me. Our hope is that there will be young people that attend Discovery Day that are inspired to become scientists and thinkers and/or motivated to serve in some capacity. Regardless, our hope is that they leave campus with an appreciation for STEM and our men and women who wear the uniform, and at least learn a little something along the way.

From your time as a student studying systems technology to your time on staff at NPS, how has collaboration with industry and other DOD organizations evolved? Why is NPS’ role in the design and innovation adoption process important to military operations?

​I don't remember a single reference to working with industry back in the day (1998-2000), and frankly, that is part of why we have the challenges we have today. Sometime between the 60s and today, industry took over the lead from DOD as the lead innovators with regard to science and technology particularly. We know that we must work closely with industry to mitigate and solve the complex problems facing us today and into the future. NPS and the Naval Warfare Studies Institute (NWSI) are focused on this facet of our future. I don't believe that anyone knows how this will work, we seem to be struggling to "get out of our own way," as the rules and guidelines that we have developed and built over that same time period seem to be hindering us at every turn. This is definitely a motivating factor for me and has been over the last six months or so in my role as the Outreach and Engagement lead for NWSI. If we hope to remain dominant, not just competitive, this collaboration will be critical, as will developing the "grey matter" of our future leaders.