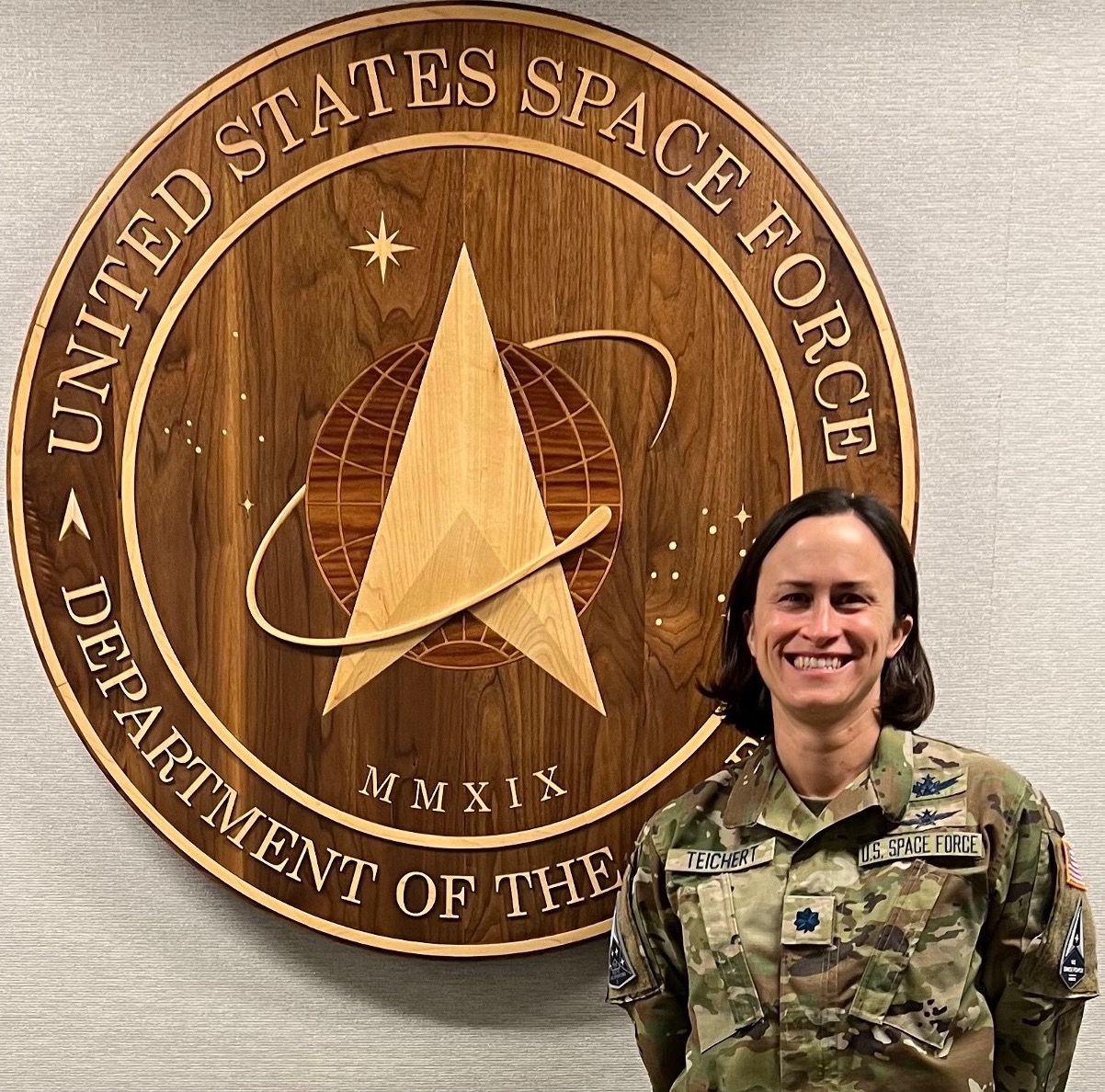 Teichert is a 2005 graduate from the U.S. Naval Academy, where she received a Bachelor of Science in Chemistry. She earned a Masters of Science in Space Systems Operations from the Naval Postgraduate School in 2016.

"The space domain is no longer a benign environment and one of our biggest challenges is modernizing our space assets to keep up with this fact. Being able to design, acquire, build, and field modern spacecraft, capable of operating in this environment, is critical. We don’t have “near peer” adversaries anymore—our pacing challenge, China, has extremely advanced capabilities and technology that are on par with what we are fielding. The United States still has great advantages but we cannot be complacent or think that China isn’t watching us at all moments!"

What led you to transfer from the Marine Corps to Space Force? How did NPS affect that decision and your career trajectory?

The Space Force is a new service, the first in 70 years, and is establishing a new culture. I wanted to be a part of that. I loved the idea of being able to take the best of my Marine Corps career and help shape this new organization. NPS was critical to me being able to transfer—my NPS education gave me a solid foundation in space operations. My educational payback after NPS gave me experience in space-related strategy, budget, and policy decisions at the DOD level.

NPS completely changed my career trajectory. Before NPS, I had worked at the tactical level within the Marine Corps; I hadn’t been exposed much to the Navy, much less the rest of the Joint Force. NPS gave me a foundation to work at the strategic level. During my tour after NPS, I briefed multiple Service Secretaries, Undersecretaries, and high-level general and flag officers, on significant programmatic decisions. I was a member of several working groups where the results of those groups have changed the landscape of the Department of Defense—the U.S. Space Command re-establishment task force, the initial Space Force task force, and the establishment of the Space Development Agency. Between the foundation I received at NPS and the amazing people I was surrounded by in the Pentagon, I was well prepared to contribute to those working groups.
‍

‍
What was the most impactful part of your time at NPS? What sticks with you the most, particularly regarding Space Systems research and experimentation?

At NPS, I learned to love learning again. I was burnt out after college (like most folks are, I would think) but by the time I got to NPS almost 10 years later, I was infinitely more aware of the amazing opportunity I had been given. As a student at NPS, I was still surrounded by military operations. As part of my thesis research, I had the opportunity to participate in several exercises, to include TRIDENT JUNCTURE (Spain) and PACIFIC ENDEAVOR (the Philippines). I also got to experiment alongside allies and partners at the NATO Maritime Interdiction Operations Training Centre (NMIOTC) (Greece). Those experiences were vital to my growth, first and foremost, as a military officer, and secondly, as a graduate student learning how to conduct research and experimentation. Dr. Bordetsky and the fantastic CENETIX lab team were crucial in enabling so much experimentation-focused travel in connection with my thesis.

You recently visited NPS as the Aide-de-Camp to the Chief of Space Operations, Gen Jay Raymond. What has changed in Space Systems since you graduated in 2016? What is NPS doing and what can NPS do to best prepare Guardians and future Guardians for leadership roles in the Space Force?

I think the main change between 2016 and now is the sharpened focus on the space domain. When I graduated, U.S. Space Command hadn’t been reestablished and Space Force hadn’t yet been born. The Marine Corps had a small cadre of space professionals who mostly sat on MEF and above level staffs, helping to advise commanders on employment techniques of the Air Force’s assets in support of Marine Corps operations. Just this year, the Marine Corps started the process for a dedicated primary space operations military occupational specialty. Across the Joint Force, there is a greater understanding of why it is important that we have “space smart” warfighters—which is what NPS can do to best prepare anyone for leadership roles. I think the best thing NPS can do to prepare servicemembers for leadership roles is the same for Guardians as it is for Marines, Sailors, Airmen, and Coasties—educate joint warfighters. The ability to be surrounded by top-tier educators, researchers, and fellow service members from around the Joint Force is something that very few institutions can do and one of the key elements that makes NPS unique. I think the continued partnership between the Space Systems Academic Group (SSAG) and the DOD and IC space organizations is essential to student growth and awareness of the greater space enterprise. NPS allows, and encourages, students to do timely, relevant research, solving problems that they have faced in their own careers. The SSAG is no exception.
‍

‍
Private industry outpaces government development of space technology in many ways. How does Space Force work with private industry to rapidly equip our DOD with best and most relevant technologies? How can NPS support public-private partnership and collaboration in the Space sector?

The hands-on experience I received was invaluable. NPS must continue to bring in opportunities for students to “get their hands dirty”—we can’t be afraid to learn from best practices, whether that’s from other students, from our allies and partners (another amazing benefit of NPS), or from industry!

NPS is great at focusing research and experimentation on DOD-specific problems. I am looking forward to seeing the research and development opportunities for students that are cultivated from the Microsoft cooperative research and development agreement (CRADA). The close partnerships with industry, and the opportunities that students have to work with new equipment is essential. When I was going through NPS, the school had a CRADA with Inmarsat, and I was able to test and evaluate several new satellite communications (SATCOM) terminals as part of Inmarsat’s Global Xpress network. It was a great experience to be able to give direct feedback to a vital industry partner.

As part of the SSAG, the students were able to go on what are called “experience tours” where we visited commercial businesses and other government entities. We took spacecraft manufacturing factory tours where we had the opportunity to see satellites in various phases of being built. We received world-class briefings on some of the most advanced technology on the planet. NPS must continue to support those endeavors, ensuring that students are exposed, early and often, to those opportunities. This example is more of an intergovernmental partnership but, because an NPS faculty member had previously worked at the National Reconnaissance Office as a program manager, several students, myself included, were able to see the satellite she had worked on get launched from Vandenberg Space Force Base, a couple of hours down the California coast from NPS. An incredibly memorable experience, especially since the launch window started around 2 a.m.!
‍

‍
Integrated deterrence is at the core of the 2022 National Defense Strategy. How do space operations, policies, and investments impact multi-domain deterrence? What are the most urgent threats and challenges in the space domain?

General Raymond routinely says something that resonated with me as I read this question—there is no “space warfare,” there is only warfare. The space domain, and therefore the Space Force, is critical to how the U.S. military fights and wins wars. Space operations are vital to integrated, multi-domain / cross-domain deterrence. Our ability to sense and make sense of our surroundings is formed by information that comes from and through the space domain—missile warning, environmental monitoring, satellite communications, navigation, timing, and treaty compliance are all provided or enabled by space operations. The space domain is no longer a benign environment and one of our biggest challenges is modernizing our space assets to keep up with this fact. Being able to design, acquire, build, and field modern spacecraft, capable of operating in this environment, is critical. We don’t have “near peer” adversaries anymore—our pacing challenge, China, has extremely advanced capabilities and technology that are on par with what we are fielding. The United States still has great advantages but we cannot be complacent or think that China isn’t watching us at all moments!