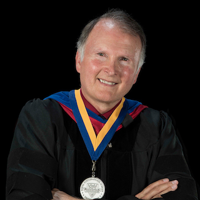 In 1992, Arquilla co-founded the Defense Analysis Department at NPS with Dr. Gordon McCormick and then-Cmdr. William McRaven. He designed and instituted the Special Operations and Irregular Warfare and Information Strategy and Political Warfare curricula. Since that time, Arquilla has served as a professor of defense analysis and will continue to serve NPS as an emeritus professor.

On the history of the Defense Analysis Department...

In the beginning, Defense Analysis has always been about what's next. That's a conversation that Gordon McCormick and I began in the 1980s when we were both still at the RAND Corporation. From his perspective as someone who is chasing after insurgence in the Andes and from my perspective, as a person who wondered about how technology was going to change the world, we came to the conclusion that irregulars: terrorists, insurgents, transnational criminals, and other kinds of networks, were going to be greatly empowered in the years to come. Gordon had the idea of creating an educational program around this and to its great credit the Navy, and partly because of the energy of then-commander and later Admiral Bill McRaven, the Navy came to the conclusion that this was a worthy endeavor. So Gordon and I made our way up to Monterey and we began and we're roughly 30 years into this enterprise.

It breaks down into decade-long chunks. In our first decade, we focused to a great extent on the problems of irregular warfare, the rise of terrorist networks, and thankfully I think we contributed well to preparing ourselves for the various campaigns of the post-911 era. In our second decade, we broadened our what's next discussion to include the implications of the information revolution for military strategy and organization, and doctrine. We developed the Department of Defense's Information Operation Center for Research, and we of course continued to do our work in special operations, irregular warfare, counter-terrorism this time with the addition of network analytics and other cyber techniques. In our third decade, I think what we did is put all of that together, both the irregular warfare and the information strategy with a new approach that's reflected in our curriculum on Applied Design for Innovation. We know that the United States is no longer in a position simply to outspend its opponents, and potential rivals, and so we have to think innovatively, have to design carefully, and I think this will help to prepare us for the emerging new era and great power competition. As we begin to think like designers, not just of products or weapons, but the design of whole systems, which means using the technology in ways that may inform organizational redesign as well as a military doctrinal innovation.

How has the post-911 era and the increased reliance on special operations directly affected education and research within the DA Department?

For the past 20 years, the special operations community has done most of the heavy lifting in our various campaigns. Not only in its own actions but to serve also as a laboratory for the doctrines of the larger military. The Marines, for example, in Iraq began to adopt a number of the methods employed by the smaller, special operations formations and so when we shifted from operating large forces from big forward operating bases to setting out platoon-sized outposts throughout Iraq, particularly in Anbar province, we created a new concept of operations, that after years of difficulties with the insurgence, was able to turn the tide and reduce violence by about 90% in nine months and to keep it down. This is roughly around 2007 to 2010 [we were able to] keep things very peaceful until we walked away at the end of 2011. When ISIS arose and conquered much of Iraq we came back again, using this whole idea our advanced technologies empower very small military formations.

So with a very light footprint, first under President Obama then under President Trump, we conducted a campaign Operation Inherent Resolve that was run basically on a manpower shoestring, that was highly effective in destroying the ISIS caliphate and of course, its splinters are in different parts of the world, including Afghanistan today. But this was a tremendous success and it's something that we study very closely in the department just as we are studying closely what went wrong in Afghanistan, how is it that we weren't able to achieve a similar level of success there with this lighter footprint.

These are the sorts of things our program is charged with examining, analyzing, and thinking through in terms of the future.

How does the Applied Design for Innovation curriculum enhance our adoption of innovation and emerging technologies? Where would you see the NPS foundation, being able to play a role in that for the school?

View the complete answer on video.

The NPS Foundation can play an essential role in enhancing public-private cooperation. It seems to me, one of the central American challenges is to bridge the gap between what's going on in the industry and what's happening inside, for example, the Department of Defense or in one of the intelligence agencies and earlier efforts such as the CIA's In-Q-tel or the Defense Innovation Unit Experimental, both located in Silicon Valley, have not been able to open that door as wide as we would like. So I think in our program to the extent to which we're able to help bridge that divide between public and private. The Foundation plays a central role in that, but we also have some enabling regulation that has allowed NPS to do more itself with industry.

We talk a lot about innovation, we also need to talk about imitation. Part of our job as a program is to harvest the edges. What are other folks doing that's innovative? Maybe what we want to do, is to take some of the best ideas we see out there and adopt them ourselves, with perhaps some new wrinkles that we add. That's why applied design again, is part of that new curriculum. If we think as designers, we will look at what's out there and emulate and build upon another country's design, or by harvesting the edges of those ideas and technologies, we'll figure out how to create counters of our own to those technologies.

Our program is thinking not just in terms of technology, but the way we organize our surface fleet units and their operating concepts will have to change because of these technological advances.

Your 1993 article Cyberwar is coming! correctly predicted that cyberwarfare would be the major threat of the 21st century security landscape. Your latest book, titled Bitskrieg: The New Challenge of Cyberwarfare examines vulnerabilities to current and future cyber threats. What are some immediate actions our DOD can and should take to lessen vulnerabilities?

It always amazes me how senior military officers retire and they come to love strong encryption. If only this were the case prior to their retirement. We simply do not encrypt our information enough, not often enough, not strong enough. This remains a central challenge in cybersecurity for us. I'm very proud of our institution, the Naval Postgraduate School, for having begun a process of encouraging the use of cloud computing well over a decade ago. This is catching on quite a bit in the Navy, and I think is going to diffuse throughout the services in the years to come. And this is one of the linchpins of what I call in the book "data mobility," the cloud is simply someone else's computer, but the point is it is somewhere else. And so it makes it a little harder for a hacker to find it. Don't just put it in the cloud and leave it in the same place without moving it around. What I like to say is that data at rest is data at risk. If it's just sitting somewhere behind a firewall or protected by antiviral software, sooner or later, it's going to get got because a firewall and antiviral software only recognize what they know already and hackers are in the business of always presenting a new exploit that won't be detected and they walk through firewalls.

It seems to me, particularly in terms of cybersecurity, the Naval Postgraduate School has been absolutely on the cutting edge. And it's one of those things that we and the Foundation together have to try to amplify and really make sure that people hear this message throughout the defense community.

Cyberwar is indeed coming. I said that almost 30 years ago, at the time people said two things: "What is cyberwar?" and "Where is it coming from?" Now everybody knows what cyberwar is, and they know who's good at it. But we're still not as well-prepared as we need. It's part of why the subtitle of my book is the new challenge of cyber warfare. There's a whole group of new capabilities emerging and we haven't even prepared for the last generation of changes in information technology. We're a couple of steps behind, we got to lace up our running shoes and get in the game here. And that's why I wrote the book with a certain sense of urgency.

How would you describe your time at NPS?

What I discovered early on in my three decades of teaching at NPS is that I wouldn't teach anywhere else. There is not another university like ours, where the student body is so experienced, all of them interested in the range of questions and military and security affairs. As I look around the campus at my faculty colleagues, I see that they too are interested in one way or another in the principal problems in military and in security affairs. In the finest universities in the world, you will generally find not more than a handful of faculty who are focused on the issues of strategic affairs and only a tiny slice of the students the same.

So it seems to me, we have something very, very special here in Monterey. And it has been my privilege to participate in it for a long time.