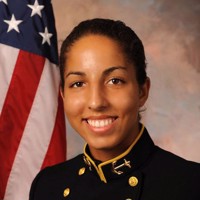 Lt. Kahra Kelty joined the Navy in 2015, after her graduation from the U.S. Naval Academy. While at the Academy, she played Division I soccer through all four years. She served four years as a Surface Warfare Officer before moving to Engineering Duty Officer. Her first tour as a SWO was on USS Curtis Wilbur (DDG 54) in Yokosuka, Japan. While aboard, she worked in the Engineering Department as both the repair officer and the auxiliaries officer. She then moved to San Diego and served onboard USS America (LHA 6) as the fire control officer. After her last ship duty, Kelty moved to Panama City Beach, Florida to attend the Joint Diving Officer course at the Naval Diving and Salvage Training Center. In 2018, her background as a naval officer and soccer player well-qualified her to join the most elite military soccer players in the world as she played for Team USA at the Conseil International du Sport Militaire World Military Women’s Football Championship. She is currently a year into her studies at NPS in the mechanical engineering program and has recently started research using the Xerox 3D printer.

What are some highlights from your time at NPS?

It has been a weird year due to COVID, but I am lucky to say that it has definitely been a fruitful year regardless. Monterey is a great place to live because of all the great hikes in the area. My favorite hike is either Garland Ranch or the Soberanes Canyon Trail. I have also visited Yosemite while living in Monterey. While in Yosemite, I rock climbed and hiked A LOT and could not get enough of the amazing views. I can’t wait to go back! I think this year has been a time for me to really invest in appreciating the outdoors since restaurants and social gatherings have been put to a temporary halt.

Why did you initially decide to join the military?

I initially joined because I knew that the military wouldn’t be the typical 9-5 job and it would provide me unique experiences and challenges. I have to say, my six years in the Navy have been very fulfilling. I lived abroad, had responsibility of safely navigating a warship throughout the South China Sea, played soccer for the U.S. Armed Forces team on an international platform, and attended Dive School. And now, I am at NPS and am looking forward to what's next.

What are some of the most significant moments in your military career thus far?

I would have to say the most significant moments in my military career are graduating from Dive School and having my sister pin me at the graduation. Also, earning my SWO pin was a significant day for me. It is an awesome feeling realizing how much you actually learned after just being onboard for a little over a year and there is still so much more to learn and do.

What goals or aspirations do you have for a future career?

Now that I am EDO, I am looking forward to my qualification tour and getting back to the fleet. I am also very excited for the dive projects that EDO-Divers have the opportunity to do. Currently, EDO-Divers are involved in developing and testing new diver heads-up displays with astronauts at NASA. Also, EDO Divers are developing and executing wartime afloat salvage and ship repair tactics for platforms. Later this month, EDO Divers will participate in wartime damage assessment and repair techniques training aboard ex-USS Bonhomme Richard under tow in the Gulf of Mexico.