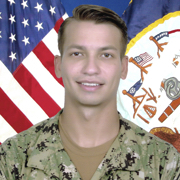 A surface warfare officer and 2014 U.S. Naval Academy graduate, Lt. Mitchell Kempisty served on board the USS TRUXTUN (DDG-103) in Norfolk, Virginia, and then on board the USS MONSOON (PC-4) in Bahrain. He is presently working on his master’s degree in astronautical engineering in the Space Systems Engineering program at Naval Postgraduate School in Monterey, California.

Kempisty is the current president of the NPS Foundation Yacht Club and will remain the President until February of 2022.

"The NPSF Yacht Club is a valuable asset to the wellbeing and morale of NPS students, their families, and the military community in Monterey. It provides them the opportunity for a family-friendly activity of learning and enjoying the art of sailing, which is the foundation of Naval skill. The race team also increases the footprint of NPS and the military in the competitive sailing world, through competition with other yacht clubs around the country. It is vital to the military community in Monterey that the club continues to receive the support it needs to thrive for years to come."

Over the last 18 months, you’ve reinvigorated the NPS Yacht Club, including returning NPS teams to competitive sailing. Tell us a little bit about that process and why it was important to bring sailing to the NPS community?

About 2 years ago, some members of my cohort and I formed a team to race our Shields class sailboat “DeLaplaine” against other boats from the Monterey Peninsula Yacht Club. We had never sailed before, so we learned on the job. We bonded as a team throughout that initial season. I was disappointed that the NPS Yacht Club was not getting much support, only maintained by Ron Giachetti, a professor at NPS, who also raced with us and taught us the ropes. I enjoyed the club and the opportunities it could provide to students and families, so I decided to do something about it. The NPS Yacht Club is deeply rooted in the history of NPS and the NPS Foundation and needed to be revitalized as the premier club at NPS.

I took over as Commodore and was graciously assisted by Ron Giachetti as the training officer, Maj. David Richey as the treasurer, and Lt. Anthony Seda as the maintenance officer.  We have increased our activity, grown our fleet to 5 boats and developed a new website for our club that consolidates information, and simplifies rental scheduling and payments: NPSFyachtclub.com.

We now have hundreds of members, mostly active renters and racers. The rental boats are booked by members every weekend and typically during the week as well. We offer sailing classes to new members who want to learn how to sail. Classes are taught with a systematic curriculum by experienced members over the course of multiple weeks.

Managing this club takes a significant effort by the board members to manage the club memberships, schedule and teach classes, manage the racing team, coordinate with the NPS Foundation, and maintain the boats. This could not be done without the significant efforts of the full team of students and professors on the board. Replacement board members that will take over from us when we graduate have been selected and are working with us closely to ensure the continuation of efforts toward building a bigger and stronger Yacht Club for NPS.

The NPS Foundation’s first contribution to NPS came in the form of four sailboats, used to establish a sailing and seamanship program. What does the current fleet of the NPSF Yacht Club look like?

Over the last 18 months, we have increased our fleet from 2 to 5 boats: “DeLaplaine” and “Meritage” as our two shields race boats, and “Cloud 9,” “Iris,” and “Rocketman,” as our 3 rental boats for members. “Meritage” was donated to us by Jerry Stratton from the Monterey Peninsula Yacht Club in order to double our racing fleet. Maj. David Richey, Lt. Anthony Seda, Capt. Craig Miles and I acquired “Iris” with our own club funds and sailed it down the West coast from San Francisco for 31 hours through the night to increase the rental fleet for members. Furthermore, Lt. Anthony Seda and I acquired “Rocketman” in San Francisco with the use of our own club funds, and trailered it back to Monterey using my pickup truck.

Tell us a little bit about the activities that the NPS Foundation Yacht Club has taken part in, both racing and recreational since you have been the Commodore.

We have competed in 2 seasons of Shields class racing against boats from Monterey Peninsula Yacht Club, we host dock socials for all members and prospective members to bring families together and offer the opportunity to learn about sailing and how to get involved with the club. We have another dock social scheduled for Dec. 4, 2021.

Most notably, NPS Yacht Club competed this year in the National Shields Class Regatta in Oxford, MD. This amazing experience was important because it increased awareness of NPS and relations with the sailing community around the country. Because of our appearance in the Regatta, we have solidified NPS’ presence at Nationals for years to come. NPS will be competing in Nationals again next year in Newport, RI. Lt. Anthony Seda and I will be racing with another team in Newport against NPS, so that should be very exciting.

How has your involvement with NPS Foundation and clubs enhanced your time at NPS?

Involvement with the NPS Yacht Club has given me the ability to give back to NPS and the NPS Foundation. The club offers military students and families the opportunity to learn and enjoy the skill of sailing as a great leisure activity no matter their skill level. We also invite and encourage members to race with us during the season to become part of a close-knit team and make friends along the way. I love being able to provide a fun outlet for members and an enjoyable experience through leisure and competition.

You invented and patented a durable nametag as a student at NPS, can you tell us a little bit about the impetus behind the idea and the process to have it patented?

I began the idea as a shower thought when I was stationed in Bahrain on USS MONSOON (PC-4) in order to fix the issue of disheveled nametags on our coveralls. On my off time at home, I bought a 3D printer on Amazon and got my own license for a CAD program, and began to learn how to use them to make the product. Once I had the first prototype, I realized that I should be able to patent it. My good friend who is now a lawyer, hooked me up with a patent lawyer to assist me in writing and submitting the patent application. Once this was complete, I began working with a manufacturer to mass-produce it, and “uGuard” was born. After an article about it was released by NPS and Navy Times, Vanguard Industries contacted me in order to license the product. The product was successfully licensed under Vanguard Industries and they now sell it as “The Enforcer.” They are an amazing company and we have a good relationship.

This process took 3 years from the shower thought to a patent and licensed product with Vanguard. It was a long journey with a lot of roadblocks along the way, but I powered through the doubts and unknowns. Now that I have gained the experience and confidence in the world of inventing and business, it has opened the door for me to take every small idea to the finish line. I hope I can serve as an inspiration to others to let them know that anyone can invent with a little bit of drive and heart.

What are your professional goals? How did your time at NPS affect those goals and your career trajectory?

My professional goals in the military are to continue thriving in the Surface Warfare community and one day become a Captain of a ship. When my time in the military comes to an end, I would like to work in the private space industry as an engineer. My program at NPS has given me the opportunity to make the dream of making a difference in the space community a reality in the next chapter of my life, and I am thankful for the opportunity it has provided me for my future.