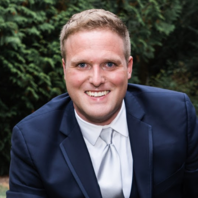 Lieutenant Sam Royster earned his bachelors in Nuclear Engineering from Oregon State University in 2012. As a participant in the Nuclear Officer Propulsion Candidate program, he received his commission from Officer Candidate School shortly after graduating. His first tour was aboard the Los Angeles Class fast attack submarine USS CHARLOTTE (SSN 766), based out of Pearl Harbor, Hawaii. Four years later, Lieutenant Royster transferred to Naval Surface and Mine Warfighting Development Center, Sea Combat Division in San Diego where he served as the training lead for the Advanced Anti-Submarine Warfare Officer course. He now serves as an Engineering Duty Officer and is pursuing his degree in mechanical engineering at NPS.

Your research focus is on robotic-assisted hull husbandry for Navy ships and submarines. What inspired your interest in this topic?

When you see pictures of submarines in movies, their hulls are a smooth, sleek, and torpedo like. In reality, they quickly grow thick algae. And because speed is one of the primary advantages afforded to a nuclear submarine, hull fouling is a major problem. It slows us down, makes us less efficient and makes hull inspection more difficult. Moreover, the existing process for correcting hull fouling is dirty, dull and dangerous work. These factors make hull-husbandry a prime candidate for autonomous system intervention, and I’m hoping that my thesis work can help the Navy move towards a future where ship and submarine hulls are always clean.

What was your experience like presenting this idea to the BENS group in Silicon Valley?

It was a great capstone-type event for the Sense 21 Innovation Leadership Course at NPS, where I got to solicit feedback on my idea, envisioning story, and the way ahead for my project from some very smart and powerful people I would not normally have networked with. Following the event, I was put in touch with personnel at iRobot, Flir Corporation, Woods Hole Oceanographic Institute, and several other research institutions at the leading edge of unmanned underwater systems development, which will certainly help to provide direction while moving forward with my thesis research.

What have you gained from your time at NPS?

When I arrived at NPS, I had just left the submarine community to join the EDO community, so my professional peer and mentor network shrank drastically. NPS has afforded me the opportunity to interact with my new peer group and network with senior mentors in the community.

‍What have been some highlights of your military career thus far?

I was fortunate enough to participate in a Western Pacific deployment when I was onboard the USS CHARLOTTE. As I was nearing the end of my 36-month tour on the CHARLOTTE we were chosen as one of the host boats for the Submarine Commanders Course (SCC), which meant I got to participate in the planning and execution of a lot of rarely executed submarine missions including under-hull periscope reconnaissance, mine field navigation, and a close aboard acoustic intelligence gathering maneuver called an SPL. Also, as CHARLOTTE’s peacetime safety officer, I facilitated the safe launch of 42 MK-48 ADCAP torpedoes during SCC and a preceding exercise, which was a record for junior officers on the waterfront.