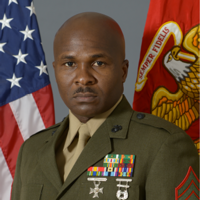 Master Sgt. Wright is a native of Liberia, West Africa. His family immigrated to the United States and he grew up in Staten Island, NY. He enlisted in the Marine Corps in February 1999 and underwent recruit training at Marine Corps Recruit Depot Parris Island, South Carolina. Wright’s designated primary occupational specialty is (1391) Bulk Fuel Specialist. In February 2020, he was selected for the Marine Corps Foreign Area Staff Non-Commissioned Officer (FAS) Program and is currently assign to the Department of National Security Affairs, Naval Postgraduate School. While at NPS, Wright studied Regional Security in the Middle East, SE Asia, and Sub-Saharan Africa.

During his studies, Wright researched corruption and good governance in Sub-Saharan Africa: why Africa is rich in natural resources, yet so poor in infrastructural and economic development. He also looked to define what democracy is in Africa compared to developed Western countries. Lastly, he examined natural resources and conflict in Africa.

What are some highlights from your time at NPS?

Some highlights of my time here at NPS were my admiration for how the school remained agile and quickly adapted to the virtual training environment during the pandemic while still maintaining academic excellence standards. As a member of the enlisted forces, another highlight was working in a collaborative environment with officers from other branches of the U.S. military and foreign nations. Though I was not at NPS as a thesis writing student, I still learned a lot from the professors while sharing my vast knowledge of the African continent and the military experiences I have had for over 20 plus years with others. As a member of the Department of Defense community, I will say that, despite COVID-19, NPS did meet my needs and expectations in education and research programs, which was my most excellent highlight.

Why did you initially decide to join the military?

The military was never something I thought of initially. I had a four-year soccer scholarship to college after graduating high school, however, I lost my scholarship after a season-ending injury in a tournament. I had to drop out of college, but had no intentions of staying in my neighborhood and working dead-end jobs like high school peers. So, I grabbed my credentials, walked into the Marine recruiter’s office, and 22 years later, I am still here in uniform.

What are some of the most significant moments in your military career thus far?

There are several moments, the most significant being when I was able to provide humanitarian assistance in Sri Lanka after the 2004 South East Asian earthquake and tsunami, and serving as a French linguist in Djibouti, Africa, during the Haitian earthquake relief in 2010. My greatest moments have been the two times I served as an instructor at my primary military occupational school, training future military leaders. I also have to mention getting selected for the Foreign Area SNCO program and being afforded the opportunity to attend one of DOD’s top-level schools (NPS).

Any goals or aspirations for your career?

The two goals I set out to attain were to make it to one of the highest senior enlisted ranks and to complete my graduate studies. So far, I have achieved both. I have attained the rank of a Master Sergeant, and have two master’s degrees. Despite my career in uniform coming to an end, I still intend to apply the knowledge gained from at NPS and in the Foreign Area SNCO program to continue serving in a future role with the State Department.