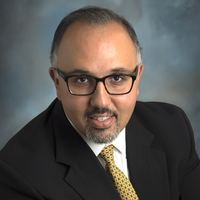 Mohammed M. Hafez earned his Ph.D. from the London School of Economics and Political Science in 2000. From 2013–2018, he served as the Chair of the Department of National Security Affairs at the Naval Postgraduate School in Monterey, California. A specialist in Islamist movements and political violence, his books include Why Muslims Rebel: Repression and Resistance in the Islamic World (2003); Manufacturing Human Bombs: The Making of Palestinian Suicide Bombers (2006); and Suicide Bombers in Iraq: The Strategy and Ideology of Martyrdom (2007). His current book project, The Nearest Enemy: Factionalism and Fratricide in Militant Islamist Networks, investigates inter-rebel wars in Algeria (1992–2002), Iraq (2003–2011), and Syria (2011–2016) using a combination of comparative case analysis and network-analytic methodologies.

Dr. Hafez is also the author of over 25 journal articles and book chapters on political radicalization, foreign fighters, and Islamist ideologies. He regularly briefs government and military analysts on issues related to terrorism, the war of ideas, and countering radicalization. Dr. Hafez has made several appearances on PBS News Hour, NPR, CNN, C-SPAN, and other national and international media forums.

Your research has focused on Islamic extremism and radicalization, and countering violent extremism. What was the impetus behind your interest in this area?

As a Muslim American, I became interested in how militants deploy Islamic texts and traditions to motivate acts of political violence in the modern world. Many stereotypes and simplistic theories surround this phenomenon, but my intuition led me to believe that the violence has non-religious roots. This is quite a complex issue and cuts across religious traditions and ideological movements. This research has become personal to me because my religious heritage is erroneously implicated in terrorism, and many of the victims of extremists are Muslims.

In 2019 you co-authored an article on rebel movements in Syria. What insights into the recent airstrike in Syria can you share?

Iran, over the past two decades, has exploited conflicts in neighboring states in order to expand its network of local alliances and intimidate rival states. Since President Biden has been sworn in, Iranian-backed groups have increased their low-intensity violence against American bases and facilities in Iraq. It is common for adversarial states to test an incoming administration to get a sense of what they could get away with. President Biden chose to respond by attacking Iranian-backed militias that reside on the Iraq-Syria border to deliver a message of deterrence. He is essentially saying that we will respond to your attacks on a tit-for-tat basis. He chose to attack on the Syrian side of the border in order not to embarrass the Iraqi government by violating its sovereignty. The US is less concerned with Syrian sovereignty since the Syrian regime is not an ally of the US.

Would you share your thoughts comparing radical extremism in Islamic nations versus the surge of radicalism in the US?

I believe that the mechanisms of radicalization that one finds in Islamist movements can also be found in the radical movements right here in the U.S. Specifically, radical movements, regardless of their ideological content, rely on four elements to radicalize their members: grievances, ideological narratives, network connections, and enabling environments and support structures. Of course, there are unique features as well, but I suspect the overlap in radicalization mechanisms is greater than the differences between them.

You get a lot of facetime with NPS students. How would you describe the collective student body?

I taught at civilian institutions before coming to NPS in 2008. I think our students are unique in two respects. First, many of them come to our classrooms with real-world experiences that truly matter. We educate foreign area officers that have been overseas in combat, intelligence, or advisory roles. Some are security cooperation specialists that know a great deal about our partner nations in the combatant command regions. I find that I learn a lot from them even as I try to impart my bit of knowledge to them. They are truly a pleasure to engage in this regard. Second, many of our students are eager to put their past experiences into an intellectual framework that can help them make sense of the past as well as improve as they promote through the ranks. This makes them serious students who are eager to learn, ask critical questions, and reflect on past policy failures in places like Iraq, Afghanistan, and the war on terrorism. They seize the educational opportunity in the fullest sense possible.

What is one thing you would recommend to all students during their time here in Monterey?

I have published with few students over the years. They have a lot to offer experientially, and they should make an effort to link up with their professors to combine their academic knowledge with their experiences to publish aspects of their theses and classroom papers.