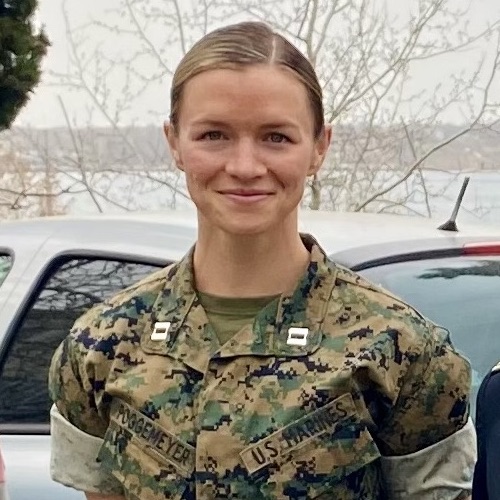 Capt. Natalie Poggemeyer commissioned into the U.S. Marine Corps in 2013 through NROTC after graduating from the University of Southern California with a B.S. in Kinesiology. Her primary MOS is Communication Strategy & Operations (formerly Public Affairs). She has previously served at U.S. Marine Corps Forces, Pacific; II Marine Expeditionary Force; and the 26th Marine Expeditionary Unit. She completed the Foreign Area Officer (Eurasia) training pipeline in June 2022 after completing her master's degree in Security Studies at NPS, Russian language at DLI, and one year In-Region Training based at U.S. Embassy Riga, Latvia. She is currently the 3rd Marine Aircraft Wing COMMSTRAT Deputy Director, where she is fulfilling the USMC dual career track rotating between COMMSTRAT assignments and FAO assignments.

"The blend of material, professors, thought-leaders, creativity and momentum fostered free and critical thinking, unbounded by procedural constraints of a typical military institution, yet focused on the very relevant problem sets we face within it."

What was the most impactful part of your studies at the Naval Postgraduate School?

One of the most impactful parts of my studies at NPS was the unique environment created by the convergence of military and civilian academia. The blend of material, professors, thought-leaders, creativity and momentum fostered free and critical thinking, unbounded by procedural constraints of a typical military institution, yet focused on the very relevant problem sets we face within it.

Specifically, I really enjoyed the course “Media and War” with Dr. Mabry. Little did I know that the discussions and papers from that course in Fall of 2019 would be more relevant than ever in Spring 2022 as the world watches a land war in Europe through the lens of all means of media.

What led you to NPS and what factors led to your area of study while attending NPS?

I came to NPS for the Security Studies (Eurasia) master’s degree program as the first step in the Foreign Area Officer program. As a COMMSTRAT officer, I worked with a few U.S. Marine Attachés throughout the world while on exercises and deployments, and the critical role they played connecting U.S. forces with host nation forces, smoothing friction, seizing opportunities - it really appealed to me. Little did I know my eyes would be opened to a much larger security cooperation apparatus than just the attaché service, but this was the catalyst for my interest. I applied for the FAO program because I see it as an impactful way to serve our country through working in the people business (across cultures), learning and using foreign language, and connecting systems and people to solve problems at many levels.

How did your research and time at NPS help to prepare you for your current assignment?

I was not previously a student of International Relations or Political Science, and NPS did a great job of providing a rapid-fire introduction, then ushering us into deeper themes and more specific topics, all in one year. The foundation (for example, Introduction to IR with Dr. Meierding *shoutout to a great professor*) has been a lens I subconsciously applied without even knowing it whenever I traveled to a new country during In-Region Training. Power transition theory, economic interdependence, balancing vs. bandwagoning, etc. All the theories become very real applications upon exposure to countries’ geopolitical dispositions in this line of work.

The invasion of Ukraine in February was a major escalation of the Russo-Ukrainian War. How has the invasion affected Latvia both culturally and politically? How has it affected the U.S.-Latvia relationship and/or Latvia’s relationship with NATO?

Despite the tragic and appalling nature of the Russian invasion of Ukraine in February, it was an incredible time to be serving in the region and witness the strength and resolve of Latvia, NATO, and the U.S. in response. Immediately following the initial invasion, Latvians came together in support of Ukraine as a nation and as individuals. As refugees fleeing conflict poured into the country (to the tune of about 30,000 by June), Latvians welcomed them with open arms, offering homes, cars, jobs, and more. I think the immense support came from a place of deep and painful understanding, as Latvia endured three occupations, often under brutal conditions, during the 20th century until finally gaining their independence in 1990.

Following the invasion, the U.S.-Latvia relationship and Latvia’s relationship with NATO were strengthened and prioritized. The vocal and tangible support was immediate and persistent, and the very poignant reminder that the threat is real galvanized allies across the region. I witnessed U.S. Embassies and Defense Cooperation Entities focused on assisting Ukraine and listening to NATO allies and other partner nations’ concerns and desires for increased NATO and U.S. posture in the region.

Can you explain the FAO role and why it is important to have military officers with regional expertise? How do DOD educational institutions like NPS and DLI support this?

There is no subtlety in the influence of geopolitics on military strategy in today’s world. Look East and see it, look West and see it. In this arguably multipolar world order, every aspect of DIME (Diplomatic Informational Military Economic) plays a critical role in U.S. national security. By arming a contingent of our military officers with a historical and practical understanding of certain regions, we are building in relevance to policy development, enhancing defense cooperation, fostering interagency cooperation, and ultimately maintaining the primacy and capability of the U.S. military in service of our national security. No other country has defense cooperation apparatuses working in close partnerships across the entire world. DOD educational institutions are foundational in creating a professionalized corps of service members that can understand context and nuance across cultural, political, and literal boundaries. Two and a half years ago, I was writing papers on frozen conflicts and NATO aspirations. Three months ago, I was standing 70 kilometers south of the Russian border with Georgia, with eyes on the occupied territory of South Ossetia. One month ago, I was in Stockholm as the Swedes applied for NATO membership. As the world witnesses unforeseen interest in the Alliance, and a challenged Eastern European order, the relevance of a FAO is an understatement!