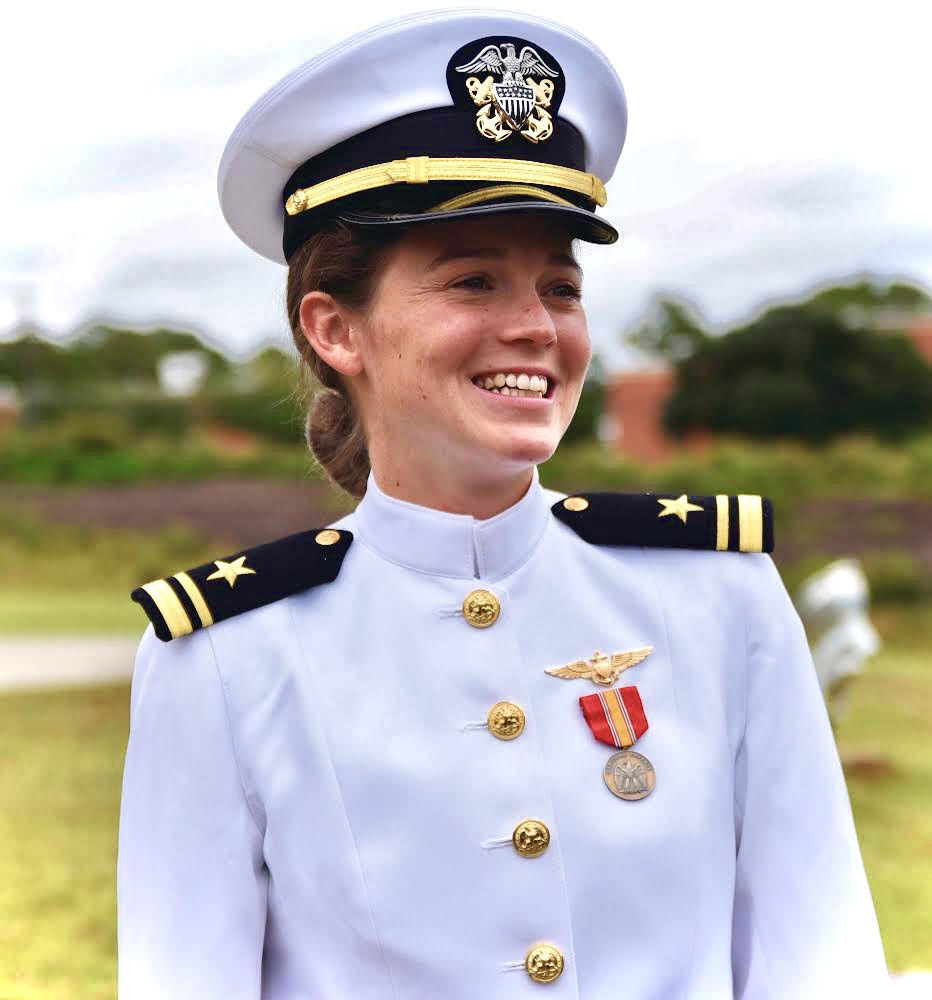 U.S. Navy Lt.j.g Suzelle Thomas, MA in National Security Studies ‘19, is a 2018 graduate of the United States Naval Academy where she received a Bachelor of Science in political science. Thomas is the first woman in the Navy to directly select F-35C Lightning II postgraduate training after earning her Wings of Gold. Thomas was named to the Commodore’s List during primary flight training, during which she flew the T-6B Texan II turboprop aircraft. She was also named VT-7 Student of the Quarter for spring 2021. She carrier qualified in the T-45C Goshawk jet trainer aircraft onboard aircraft carrier USS George H.W. Bush (CVN 77). In November 2021, Thomas reported to Strike Fighter Squadron (VFA) 125, also known as the "Rough Raiders" in Lemoore, California. VFA 125 is a fleet replacement squadron flying the F35-C Lightning II.

What was the most impactful moment during your studies at the Naval Postgraduate School? How has your time at NPS impacted your operational career since graduating?

The most impactful part of my studies at NPS was taking classes and learning alongside so many international students. The discussions with people of such different backgrounds enriched my academic experience in a way I had never seen before. It is one thing to comb through the many academic journals, books, lectures, etc., that we research in order to understand different parts of our world, but it is another experience entirely to then have officers and civilians from the very countries we study right next to you in class. I will forever value their unique insights and new perspectives on analyzing international issues. I continue to stay in touch with many of them today, and I have NPS to thank for these connections. Flight school has dominated my time since NPS, so I will be joining my first operational squadron in about a year once I finish the Fleet Replacement Squadron. However, I believe the openness and willingness to seek out other people’s perspectives that I treasured at NPS will continue to stick with me as my career progresses. NPS does a great job of bringing us together in the classroom in a way we can carry over into working with our allies in the fleet.

What factors influenced your area of study at NPS and why did you choose your research thesis, “India’s grand strategy: Ambitions & Capacity”?

During my final year at the Naval Academy, my senior thesis centered around China’s peacekeeping operations and how these actions further the long-term Chinese international agenda. So, when I arrived at NPS, the importance of Asian geopolitics was fresh on my mind. I took a class with Professor Feroz Khan and became hooked on his teachings about India’s rich history and relevance today in the Indian Ocean region and beyond. Through his guidance as my thesis advisor, I learned more about how important it is for the United States to understand foreign players like India in order to forge meaningful partnerships, especially as China continues to spread its influence across Asia. I had no idea how connected geopolitics were in the Indian Ocean region and thoroughly enjoyed learning the economic, diplomatic and military influences at play both historically and today.

Overall, I believe the Russian invasion reminds the United States to consistently nourish alliances and good faith with foreign partners around the world. I also think these recent events have shown us a culmination of the growth of geopolitics really since the fall of the Soviet Union. Since that time, the United States has wielded an overarching international presence. However, over the last three decades and even before, we have seen more concentrated spheres of influence rise in particular geographic areas. We have the Chinese who continue to test the waters in Asia and even Africa in an attempt to yield a greater influence over their neighbors, and we similarly see Russia trying to exercise its own dominance in eastern Europe. Are these the step stones for other world powers to counter the United States’ hold internationally? We cannot know the inner workings of each action these nations and their leaders make, but it is ever more apparent now that the United States’ relationship with major Indo-Pacific players is vitally important to prevent unwanted influence. Japan is certainly a key ally, and India also continues to rise as a strong actor over smaller nations in the region. Places like NPS foster expert analysis of these foreign regions and will hopefully help provide our policymakers and military members with the tools to successfully shape our strategies for years to come.

What drew you to naval aviation? What are your next career goals?

During my time at the Naval Academy, I always admired the naval aviators. I liked the way their careers centered around a work hard, play hard mentality where you spend so many hours perfecting a craft that you love to do each day. I also felt that flying a plane seemed a lot like playing a sport where your physical and mental sides come together to perform. I have loved the community so far and feel so fortunate to be where I am today. I continue to be blessed by incredible mentors in every phase of my career, and I have also been surrounded by great peers who help me continue to progress through the phases of training. In naval aviation, I learned the phrase “closest alligator to the boat” which we often use to describe studying/preparing for phases of training. It just means how sometimes you need to focus on what is directly ahead of you – the very next flight or simulator – rather than worry about the many things you will have to be doing next week or two weeks from now. In terms of career goals, the closest alligator to my boat is flying the F-35C as well as I can and finishing the FRS, so that is my focus for now. I am excited to finally be flying the jet that I will hopefully fly for the rest of my career.

Your mentor Capt. Beth Regoli gave her Wings of Gold to you when you worked for her at the Naval Academy. What was it like to pin those on in October 2021 while simultaneously making history as the first woman selected to go directly to the F-35C after earning your wings?

Specifically wearing the wings from my mentor reminds me of all the help and guidance I have received to get to where I am in my life, and I hope that I can continue to give that same help to those that come after me. Pinning on Capt. Regoli’s wings served as the culmination of years of hard work. There is no other feeling like it. Since my senior year at USNA, I have kept those wings displayed on my bookshelf in my room through my year at NPS, the year in Pensacola, Florida, during primary flight training, and the year in Meridian, Mississippi, flying the jet trainer aircraft. They served as a constant reminder of my goal to become a U.S. Navy pilot which still feels surreal to have come true. My opportunity to fly the F-35C is absolutely a testament to the many women who have come before me and made history in so many other ways. It is also a testament to all the people who guided me as a pilot through my phases of training as well. While women may be the minority, we all work together for a common goal and push each other to be the best in our craft for the benefit of the whole.