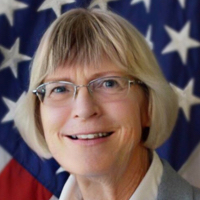 Valerie (Val) Jensen began working for the Naval Postgraduate School Foundation part-time in 1991 and has contributed to the growth and success of the Foundation’s work in more ways than can be counted. She is also the longest serving employee of the Foundation as she is now completing her 30th year. Val has played a significant role in planning the Foundation’s annual events, managing the America’s Heroes Charity Golf Tournament and playing a significant role in the Grand Winter Ball since the beginning. Val has also served as a volunteer in the military community for many years. She is a member of the Military Officers Association of America (MOAA), and the Del Monte Club, an organization comprised of staff and faculty members of the Naval Postgraduate School. She is also the 2021 recipient of the NPS Foundation’s Mauz and Warner Distinguished Leadership Award.

"I was shocked, dumbfounded, and I certainly never expected to receive the Mauz-Warner Award. Being linked with Adm. Mauz and Bill Warner, along with the first two recipients, Don Beall and Karen Hargrove, is a very special privilege."

How did you first come to NPS and what made you stay?

I first came to Monterey on my return from teaching in a DOD school in Yokosuka, Japan. I met my future husband, Jack, who was stationed there and then came to NPS as a student. I arrived in Monterey a year later and we were married in the chapel at NPS. Jack expected to return to Monterey, so we bought a piece of land. We returned to Monterey for Jack’s final tour as CO at Fleet Numerical Meteorology and Oceanography Center. After his retirement, he built the house he had been designing for the 25 years during his navy career.

What is your favorite memory from the Naval Postgraduate School?

There isn’t one thing, there were many. But the people are most important. We lived in quarters, one of the cottages, and made life-long friends of many of our neighbors. Students, faculty, and staff of NPS added to life here.

What was the most impactful moment for you during the last 30 years?

Now ending 30+ years with the Foundation, being hired by Vice Adm. Richard A. Miller and Jane Butler (former NPSF presidents) for the part-time position was the beginning of any impactful activity that followed. I believe that the Quarterly Evenings we held for several years were important. Student participation in “Stories from the Frontlines” was amazing and informative of their deployments to Iraq and Afghanistan, while the other evenings focused on research or current events were great introductions for the community to NPS.

How have the Foundation’s annual events evolved over the years, and what is your hope for these events going forward?

The first Winter Ball was planned by friends of the Foundation. As interest in the event grew, planning and work was moved to the Foundation staff, and then to a contracted organizer. After a few years, we added student volunteers to help with decorating. The ball is a lovely start to December. I look forward to having the guest numbers increase again following the restrictive guidelines of this year.

America’s Heroes Charity Golf Tournament began as a one-time event to help wounded warriors and all proceeds went to the Navy-Marine Corps Relief Society. One staff member was given the responsibility for planning, but none of us had a clue about golf tournaments! The next year a second charity was added, and the Foundation received only expenses. Several different charities were included in a part of proceeds for a while, and they changed for each event until the seven we support now became set four years ago. The very generous supporters and players have made AH a success. We have had several good sponsors over the life of AH, but I would hope corporate sponsors will take a larger role. It would also be great to see more Fund-a-Cause designation donations. The purpose of supporting charities that help service members and families is important, and I hope it continues.