Before the storm: How the Naval Postgraduate School supports international partners in infrastructure, energy, cybersecurity 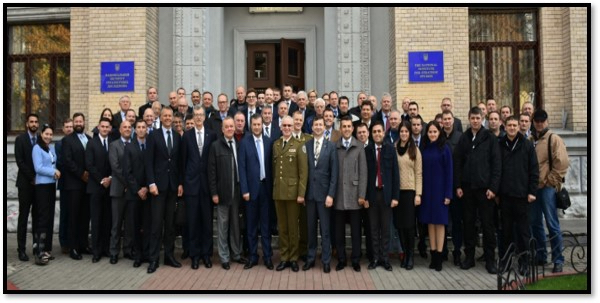 Energy security is a critical enabler of military capability. The United States identified a national security interest in helping partners and allies to become more resilient in the face of hybrid threats and attacks on the systems that undergird basic living conditions such as heating in the winter and the transportation of goods and services. The focus of the Department of Defense has been helping allies and partners develop innovative solutions to the complex challenges they face.

The Energy Academic Group at the Naval Postgraduate School plays an important role in enhancing global energy security by supporting security initiatives with NATO, partners and allies through education, research and outreach.

“As the U.S. has an interest in the protection and resilience of global energy infrastructure and systems, it is fitting that DOD’s premiere Center of Excellence for energy security provides a focus on efforts to educate our forces, as well as our allies and partners, regarding the complexities of energy to include its challenges and opportunities,” said Dr. Daniel Nussbaum, Chair of the Energy Academic Group and an Operations Research professor at NPS.

In particular, the EAG supported Exercise Coherent Resilience (CORE) since it began in 2017. CORE is a NATO-sponsored exercise in Kyiv, Ukraine, designed to enhance the resilience of Ukraine against hybrid warfare threats targeting their energy systems. The interdisciplinary team of experts from NPS and U.S. military forces worked shoulder-to-shoulder with the NATO Energy Security Centre of Excellence in the planning, development and execution of CORE exercises in the Baltics and Ukraine over the last several years. The team additionally served as the evaluation group and provided final exercise reports.

“These exercises have increased the resilience of Ukraine to weather Russian hybrid attacks. The CORE program introduced the concept of resilience to Ukraine authorities leading to new national policies,” said Nussbaum.

NPS’ collaboration with partner nations in the realm of hybrid threats goes back to at least 2009 under the umbrella of the United States Partnership for Peace Training and Education Center (USPTC). Through USPTC, faculty and students from the Naval Postgraduate School engaged with U.S. and allied partners across multiple combatant commands on a variety of topics, to include hybrid threats. As the need for more interdisciplinary work grew, NPS established the Center on Combating Hybrid Threats in early 2021 as part of an international effort to detect, deny, disrupt, defeat and deter hybrid threats.

“The Center has been able to leverage faculty members and their students [from across NPS] to provide interdisciplinary teams to participate in support of ally and partner tabletop exercises pertaining to hybrid threats and energy security,” said Nussbaum. “Such interactions are invaluable for not only building and developing relations but also for sharing information and best practices.”

This intentionally collaborative approach enables the U.S. and its allies to attack today’s problems and anticipate tomorrow’s threats.

“Recent events highlight the successes [of the exercises], for Russia’s hybrid campaigns failed to meet Kremlin objectives,” added Nussbaum. “Of course, resilient infrastructure alone is insufficient to halt a determined aggressor that is willing to execute large-scale conventional operations. Here too, other security cooperation efforts may still stymie Putin and exceed expectations.”

Russia is a critical gas supplier in Europe, using its political influence and economic clout to back its energy agenda over the years. However, as events began to quickly unfold with Russia’s invasion of Ukraine, countries around the world quickly placed sanctions targeting Russia’s energy sector and European leaders began looking at ways to shift reliance off Russian energy sources.

“Europe can improve its energy security through import of additional energy resources from places other than Russia,” said Nussbaum. “The Energy Academic Group is engaged in training and policies to ensure the security of the Caspian pipelines into Europe. EAG has long-term engagement with Turkey, Azerbaijan and Georgia to improve the security of the energy production and export infrastructure there. The gas supplies from the Caspian are one of the only major non-Russian gas supplies into Europe. In the current crisis, the Southern Gas Corridor is increasing supplies to aid Europe.”

Russia has repeatedly claimed its assault on Ukraine is aimed only at military targets. But in a speech on Saturday, Ukrainian president Volodymyr Zelenskyy accused Russian forces of hitting civilian areas and infrastructure, and visual imagery from across Ukraine supports his accusation.

“What will be interesting in this campaign is what happens or does not happen to Ukraine’s pipelines systems,” said Nussbaum.

But it’s not just energy security that has producers and consumers concerned. Russia and Ukraine combined account for one-third of global wheat exports, one-fifth of the corn trade and nearly 80% of sunflower oil production, according to the USDA.

“The invasion also has implications on environmental security around the world, especially food security. Ukraine is a major agriculture exporter, for example. Interrupting Ukraine supply of wheat to Europe and the U.S. may affect prices at markets and interruptions to more vulnerable areas such as African communities may mean food insecurity in those places.”

The Naval Postgraduate School plays a key role in supporting the development of transformational leaders and the durable partnerships that are critical to confronting threats all along the spectrum of conflict. By supporting exercises like Coherent Resilience, NPS enhances the preparedness of international partners and generates best practices for enhancing resilience of the DOD’s critical infrastructure.

‍
Energy security in the era of hybrid warfare